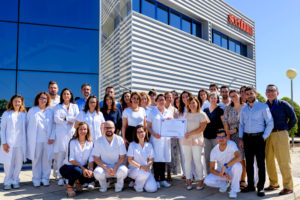 Scentium, the flavour division of the Iberchem Group, has received the European Medal for Merit at Work, an award given by the European Association of Economy and Competitiveness (EAEC) to recognise the success of companies with an exemplary trajectory at both national and European level. The EAEC has given its highest level of recognition to Scentium for its contribution in creating a sustainable European business environment.

The prize was collected by Paloma Iturmendi, Marketing Director of Scentium, on behalf of General Director, José Manuel Mateos. “We are truly honoured to receive this award,” says Mr Mateos. “Our employees make great efforts on a daily basis to contribute to the evolution and standing of our sector. This medal is a testimony of our ambition to become a reference in the creation of innovative and bespoke aromas for sweet, salty and beverage applications.”

The European Association of Economy and Competitiveness has awarded this medal across the country to companies that stand out for their commitment to training their employees and their excellent Corporate Social Responsibility and environmental sustainability policies.

Scentium is the flavour division of the Iberchem Group, founded in 1985 and headquartered in Alhama de Murcia. The company has a commercial presence in over 120 countries and logistical centres in Europe, North Africa and Asia. The Group is currently carrying out a global expansion plan and has opened two new branches, in South Africa and Mumbai, in the last two years. Over the past 10 years, it has maintained a steady 16%growth in revenue to reach a total of 146 million euros.

We use cookies on this site to enhance your user experience. If you continue without changing your settings, we'll assume that you are giving your consent for us to set cookies. View here our cookies policy.